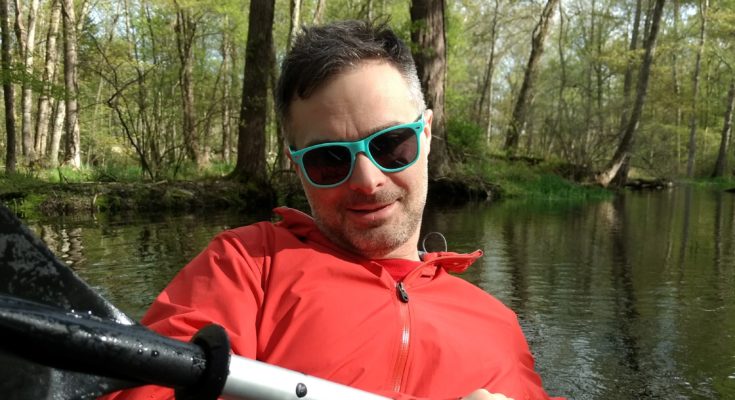 Now here’s a guy who loves to do some inflatable kayaking with his lovely girlfriend on a lovely day!

But lest my life seem too bucolic, I made sure to end the night at an unwholesome oasis called The Blue Moon Cabaret. Its EXOTIC DANCERS sign dimly lit between two construction sites, making the lil’ outpost look like an adults only on-site office trailer. Upon entering, it was dead silent. A strip club with no music playing, can you imagine how frightening that was? For a second I thought maybe this was a strip club themed haunted house set up in an abandoned mobile home. I was expecting a motion-sensor ghoul to hydraulically lunge towards me with a recorded cackle at any moment. It was a long dark rectangle with a few draped off corners to conceal activity of the unknown.

When I looked beyond the woman at the front desk, I realized why it was so quiet: there were no other patrons in the joint. Three dancers sat on a couch. Not a sexy couch mind you, it was like a couch a college student finds on bulk trash day. The woman up front turned to them with a “look alive ladies” kind of stare, they got up, and finally some music. It was as if we put a quarter in the place and it started up.

A number of stunning wonders occurred throughout the night, but for some reason the comically awful state of the sound system sticks with me as the most unbelievable. Holy shit. It was loud and so blown out it sounded like driving out of range of an AM radio station. I’m in a haunted strip club watching nude moms essentially dance to Merzbow.

I look up at the source of the sound, a lone speaker, one of those oldies that looks like it’s made of wood paneling and wicker. I guess the sound failure was so shocking because a strip club really only has a couple major things it needs to provide: dancers and the music for them to dance to. Here was a stripped club. This place proves you don’t even need drinks. It was a no alcohol venue (the Snapple was almost as expensive as a private dance. Must be some great Snapple!). This prohibition is just a trade-off of a lesser debauchery for greater ones. The dancers didn’t strip, they threw off every strand of coverings like they were itchy… flesh in your face, flesh on your lap, flesh in your flesh I blush! Nobody else was there, every dance a private dance. Truth be told, I do not have a lot of strip club experience, especially with completely nude dancers, so I had no idea where to put the money. Trying to be cool while feeling like a teenager, I went up with a dollar and she showed me the way: she grabbed my hand and pressed it dollar down against her bare breast. A fine statement on the firmness of their “no touching policy”.

Suddenly I felt transported back to my inflatable kayak, witnessing the wonders and rawness of untameable nature. This was as real as it gets, I deeply felt more than just clothing strip as I breathed in the fresh air of the real in every thigh bruise and butt pimple, in the heartbeat I felt as one of the women, Josie, held my face against her chest, in the lovely people working and working it here, in the toughness of life and the pleasure of being there. I don’t trust anything that lacks ambiguity, and I feel most alive at the sites so rooted in it.

There were many other memorable moments, but I’ll keep them a secret; after all, one of nature’s greatest qualities is its mystery!

Overall, I give Blue Moon a thousand stars and will definitely come again, because, you know, sometimes you want to go where everyone knows your fake name.