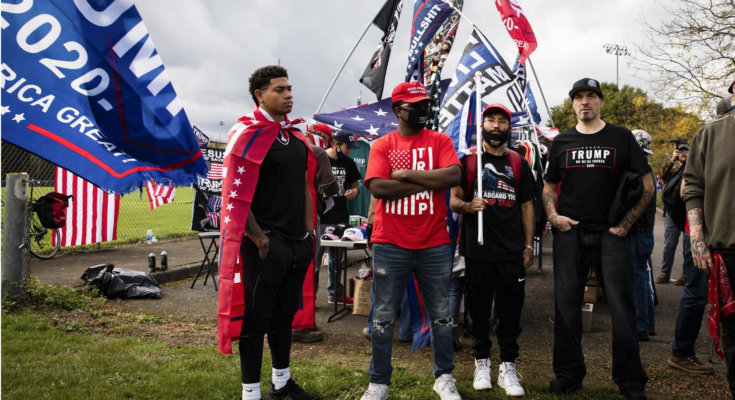 One of my neighbors is that type who was born and raised in the Hudson Valley, but since she had a taste of living in Brooklyn for four years, she calls other locals “townies”. Last night, she brought up her perceived difference between the local discount store that she loves and the Tractor Supply Co next door to it: “You can really tell who everyone is voting for by which store they go in. It’s all Trumpers at the Tractor Store, but at the discount store, it’s all black and brown people and democrats.”

Never mind the Trump 2020 merchandise, hunting gear, and pink sequins U.S.A. hats at that discount store, it is, according to my neighbor, a liberal paradise.

Of course this isn’t true. With the anxiety of a pandemic election year heightened by a media-assisted culture war with ideologically marshaled sides, one might expect a steady dose of wish fulfillment as a salve against losing ones shit entirely. But as my neighbor tried to convince me of a reality that lined up with her ideals, and not with reality, it felt like more than a stretch; it struck me that attempts at creating clear cut categorizations and comfortable narratives when the logic of the world is coming apart at the seams are starting to sound somewhat insane.

I have always been an advocate of the absurd, I have embraced noise over signal, and this year has been a buffet of the seemingly illogical:

– In the year of BLM, Trump improved his numbers with minority voters. With the GOP seeing its highest percentage of the black vote since 1980, the patronizing mantra of “the black voters saved us” that popped up after election night aged as well as the instagram black square.

– With a libertine president tagged by more than two dozen sexual misconduct allegations, who oversaw the confirmation of Brett Kavanaugh, 2020 was the “Year of the Republican Woman”, as a record number of Republican women were elected to congress.

– The blip saga of Tara Reade quickly loosened the #metoo edict from “Believe Women” to “Believe Whatever is Politically Convenient”.

– The NFL currently has a football team named The Football Team.

Not much has made sense this year. Well, it makes sense to ME, but this kind of sense is difficult to reconcile with easier, mainstream narratives of political sense-making. So much so, that straining to apply old logic to this new chaos comes off as a little bonkers. Perhaps in a less absurd world, people like my neighbor wouldn’t seem so crazy for cramming a simple peg into a complicated hole. It’s reached a point where absurdity fanatics like myself are starting to buckle: I think I’ve had enough. Im looking forward to shit getting a little more…normal?

I never thought I would feel this way. But I’ve learned that I don’t love absurdity and chaos unconditionally. They are necessary as a wedge into an overly-ordered system, as a pie in the face to pointless seriousness, but a world governed by absurdity, I’m coming to believe, is damn exhausting. I’m dying for a little more order so I can get back to not making sense.