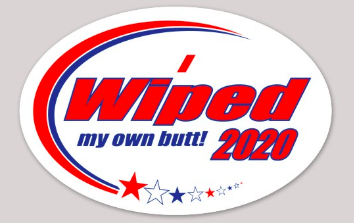 It’s nearly time for the social media roll call of voting stickers again, a tradition I have always found strangely infantile. Like a gold star in kindergarten for being good. The oval shape of the sticker could have been inspired by the face of a beaming child, proud of wiping after a poop like a big boy or girl.Meanwhile, hanging at a bar in Manhattan: I’m sitting next to two women who are loudly advertising that they work for the Elizabeth Warren campaign, yet they look like they could be daughters of Ted Cruz, kept in a basement and fed nothing but shepherds pie.They were drinking Prosecco, one was unduly warming the sparkling by gripping the glass like a beer bottle, the other winced with every sip. Yet Prosecco it must be; nothing by the glass says “important person” quite like that bubbly bile. Glass after glass fueled constant reams of complaints about society, other democratic candidates, and the service at the bar. Nice and loud so the whole room can hear.I sensed an eagerness to be seen, heard, and understood as cutting edge progressive, but all I saw were two ALL AMERICAN GIRLS, just a pair from a massive litter who crawled straight out of a bottle of ranch dressing. Predictable, but still animated, fun like puppets and large in every way, they were more Henson than human. This is the doing politics in the most famous city in the country. It’s a political cartoon that emphasizes the relationship between religion and political life. Clear distinctions are constructed between good and evil, heaven and hell, under the desperate suspension of disbelief that somehow we we’re not all going to end up in the same place not matter what. Vote Warren/Daughters of Cruz! Impeach Hell! Crown Ranch Dressing as your new savior!I remain existentialist, not nihilist. I reserve that term for the most righteous political optimists. Instead I say Laissez les bon temps rouler. Which roughly translates as I care about the world in my own weird way, and I might even vote, but I won’t shame someone who doesn’t.
Although, I might say something if you’re not holding your champagne flute by the stem.