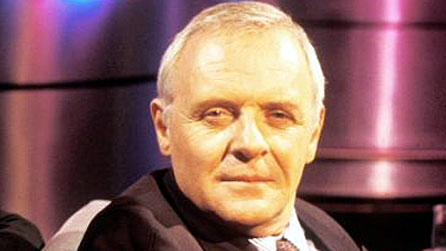 In my line of work, I run into a lot of A-list celebs. Usually I just nod at them and they wave. But the other day I decided to sit down and interview one of them: Sir Anthony Hopkins.
Here is the transcript of the conversation I had over dinner with the famous star of movies like Hannibal, Thor and Meet Joe Black.

RR: I have to admit something, when I was a kid and saw Silence of the Lambs, I thought you were the same actor who played the mean Captain Harris in the Police Academy movies.

RR: Yeah, and I was like, wow, this guy has range. It wasn’t until a few years later when I saw Police Academy again that I was like, oh that’s not the same guy at all!

AH: I can see the resemblance though.

RR: Totally, but that actor was stabbed to death.

RR: I recently binge  re-watched all the Police Academy movies, just so you know.

AH: I only saw the first three or four. I lost interest after Gooterborg left.

RR: Word. Remember when the chief got a “BJ” during a speech from a woman hidden inside a podium?

RR: Totally unbelievable, right? If I was giving a speech in front of a big audience and someone started unzipping my pants I would look down and be like “Hey, what the heck!?”

AH: Kinda shatters the trust you give a filmmaker in suspending your disbelief.

RR: Sir Tony, sorry, Tony…I also wanted to ask you about craft. I am also an artist, and in my art, I’m always seeking to portray the ruthlessness of life in graceful ways, simultaneously shouting with a double-throat: “everything is ok!” and “everything is not ok!” Any advice?

AH: Sleep. I would suggest no less than seven hours of sleep every night. Wake up feeling refreshed, splash your face with cold water and get out in the world with those eyes wide open, taking in all the horror and all the beauty. When you can no longer see the horror, and no longer see a thing called beauty, that’s when you are truly seeing nature. Only then can you begin making art.

RR: Any suggestions for movies to watch tonight?