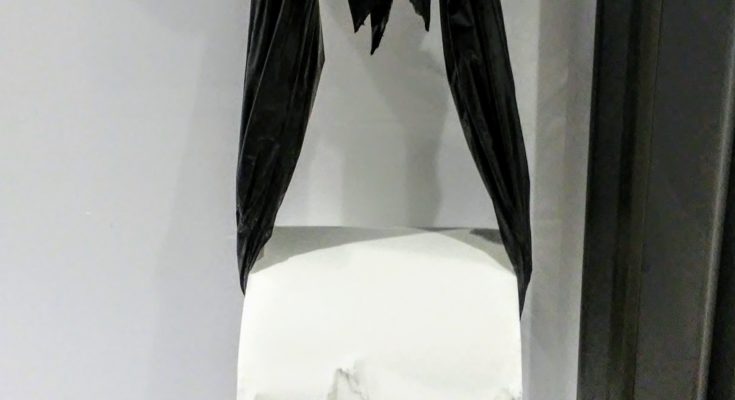 New York City seems to know when you’re leaving it, so on your way out, it will throw as much as it can at you to break you down, pull you back, or thoroughly disable your means to exit.

Getting on a bus to Cleveland last weekend took a warrior’s effort in the face of an epic onslaught against body, mind and spirit waged by New York’s most formidable last line of defense: Port Authority Bus Terminal.

The subway ride to 42nd street was rather quiet and comfortable, but soon after the doors opened: immediate peril! The wet rubber rain boots of a young woman with shopping bags in both hands failed the test of keeping her upright on the metal escalator stairs and she came wildly rolling down towards a crowd of folks standing on the platform. She arrived on her knees at the bottom where me and a couple others met to stabilize her, see if she was ok. She said she was fine, and dazed by embarrassment, she collected her things and hurried down the platform. Thinking of her rain boots, I realized I left my umbrella on the train (a foreshadowing of how I will later feel trapped inside Port Authority without an umbrella during a relentless downpour).

I headed towards the bus terminal, but first I had to pass through the underground corridors between Times Square and Port Authority. It was a hyper-stimulus of competing pulsing beats in a sprawling hard-shelled artery.

First, I stopped to watch a few minutes of a live band: “The Meetles”, a Beatles cover band playing “Rocketman” by Elton John. The lead singer, a man large enough to be all the Beatles, stood there gleefully with wet wings spreading from his crotch, maybe weak bladder, maybe the way a man built like this sweats. An expressionless maraca player played the maracas even between songs.

I moved on, beckoned by the enchanting sounds of a cello coming from a calmer zone. I found the source: a solo cellist playing to a dreamlike emptiness. He swayed back and forth, entranced by his own hauntingly beautiful sounds, and with each movement, his long hair masked, then unmasked a severe facial deformity. I couldn’t really tell if his face was a result of burn or birth. There was no crowd, which made it awkward to stop; would I feel like I was audience or just staring? Everything about the few seconds of this encounter seemed loaded with emotion and meaning: the anguish of the music, the embodiment of that music in its musician, the loneliness, and the phantom appearance that forced you to decide to actively look closer or look away. Too much. My brain was overloaded, I wanted to stop and take it in, but nerves and inertia decided that I look away.

Around the corner, I heard what I thought was a recording of an opera singer. But no! It was an actual real life opera singer! A really small one! She couldn’t have been more than 20 years old, and not much higher than 5 feet. The moment was a fine example of the comedy of disproportion, haha, a big thing coming from a little thing! Here was half aesthetic sophistication and half Looney Tunes. She spanked the walls with this giant un-amplified voice coming from a twisting animated mouth, the crowd of people who stopped to watch loved it! I wondered if they had a similar route as mine, and had also reached the cute opera star after the sublime challenge of the previous level boss with the cello, and cheered louder backed by the certainty that they could cheer for this.

Finally, the turnstiles marking the entrance to Port Authority Bus Terminal. I went straight to the information desk, making my way past a crying girl who looked like she was 14 but had a “trucker” tattoo (literally a script tattoo on her arm that said “trucker”). I inquired about the Megabus gates, “fourth floor” I was told. I didn’t even know this place had four floors. How does a bus leave from the fourth floor of a building!?

I headed directly to the fourth floor. I wasn’t in jeopardy of missing the bus, I had time, but my phone battery was low, and I didn’t want any more New Yorkness.

I got to the fourth floor, which made me understand why they call this place “terminal”. The theme of this floor seemed to be “Nightmare Hospital”. There were no open businesses, a few wanderers, one woman who could do no wandering because her foot looked like it was only being held to her ankle by a scab, and the entire fourth floor, no matter where I go, smelled not of your everyday feces, but like the freshly released bowels of a rotting corpse.

I eagerly got to the gate, but too early. I still had thirty minutes and the bus hadn’t arrived yet. I sat down against the wall. My first moment of respite brought two things into relief: number one, the sound of No Doubt’s “Spiderwebs” playing through distant speakers, a perfect soundtrack to Satan’s rich tapestry; and number two, Number Two. I started to feel the rumblings of my own bowels. The pins and needles of an oncoming shit heightened the meditation on whether to suffer a Port Authority bathroom or a bus bathroom. Sometimes the options you are faced with make you curse the freedom to have any options at all. After some strategizing and self-analysis, I decided to wait it out and head straight to the bus bathroom while it was still virginal.

My phone was dying, my ass was dying. Like stray dogs in the night, my ass and the surrounding ass smells howled at each other.

Finally, the bus. I boarded quickly, and without competition as they’re were only six other passengers. I went straight back and somehow the bathroom had already been gloriously defiled (or was locked in a perpetual state of defilement). It was too late to turn back now; it was either my pants or this abstract art called a Megabus toilet. A sad roll of toilet paper hung next to me, punished with the fate of hanging by garbage bag. I felt like high-fiving it, because in this moment, I truly understood relief. With the sound of that quick violent bus-flush, I knew I had made it, and there was nothing the city could do to stop me now. Goodbye New York! See you Monday!