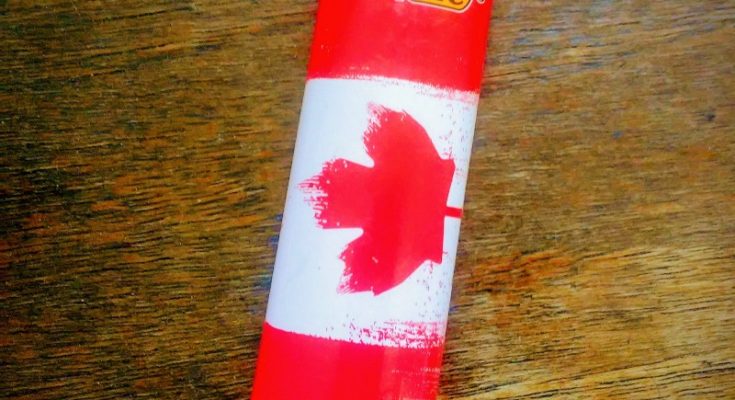 I wanted to steal my friends lighter tonight. I was house-sitting for George, watching The NHL Network in the living room, when I noticed a lighter on his coffee table. It was a standard Bic lighter but with a bright red Canadian flag on it.

I’ve never really had a lighter. I’ve never been a smoker, or liked things in my pockets, so I never carried a lighter on me. But maybe that was the old me; maybe, starting tonight, I am one of those guys who has a lighter. And I like this lighter: a shiny, good looking, classy, tacky lighter. For a brief moment, I thought of just taking it. The quick reflex of justification argued that I deserved that lighter more than George because I am Canadian, and he is not. Surely it makes more sense for me to own this lighter, so I should take it from George without his permission. My heritage gave me the green light to pocket the mint condition red maple-leafed Bic.

After the absurdity of that thought sank in, I laughed at myself. Not only because the thought of randomly stealing my friend’s lighter was stupid, and not just because I almost allowed myself to do it because of being Canadian, but mostly because of the fact I’m not even Canadian.

Perhaps what I was trying to argue was that I deserve the lighter more than George because I am closer to being Canadian than George, which doesn’t make me Canadian, but provides a sense or scent of Canadianness. My mother and grandmother came over from Canada when mom was a teenager (do you say your family “came over from Canada”? Or do you just say they drove in from Canada?) I was born in Niagara Falls (on the NY side) and I grew up 15 minutes of Canada, briefly lived in Fort Erie, Ontario for a summer, I love hockey, I have Canadian cousins, I understand and enjoy curling, and I know all the lyrics to Oh Canada and a couple Tragically Hip songs, but I DO NOT have Canadian citizenship, and nobody in my immediate family lives there. I’m about as Canadian as apple pie baked really close to the Canadian border.

Obviously, I just wanted the lighter and was looking for an excuse to be okay with taking it. I came to the conclusion that I was not going to take his lighter, but figured it was okay just to hold it. Nothing wrong with picking it up and just seeing how it felt in my hands, right?

As I examined the lighter, rotating it between fingers, I thought about how many dicks I have sucked.

I don’t bother with personal labels, but I’m certain that I’ve sucked more cock than many younger guys who identify as queer.

I remember the first time I put a dick in my mouth. It was really easy actually. Way easier than going down on a woman and having to find your way down there. I lit the lighter a couple times, no problems igniting. Where did he get this lighter? DAMN. Seriously though, if I were to own a lighter, this would be it.

If it were a rainbow lighter, I might have argued to myself that I deserved the lighter more than George because I am MORE gay than George (he’s probably never even MMF threesomed), despite the fact that I never go around saying I’m gay (or straight or bi, or anything for that matter), I could easily pull out that hat and tout my homosexual experiences long enough to take the lighter from straight George and put it in my pocket — the pocket of a member of the gay community where a rainbow lighter rightfully belongs.

Identity has been made so easy, that in many instances, all you need to do is post what you are on social media, and there you are. Actions, birthplace, ancestry, experiences aren’t necessarily needed. There is identity earned, identity inherited, identity chosen. I could identify as a gay Canadian tomorrow if I wanted to. That would make it much easier for Facebook to tailor advertisements to me, knowing what kind of stuff I might buy. As RuPaul said, “The matrix says, ‘Pick an identity and stick with it. Because I want to sell you some beer and shampoo and I need you to stick with what you are so I’ll know how to market it to you.’ Drag is the opposite. Drag says, ‘Identity is a joke.’”

I’m sure that more than half of the folks who were outraged at the masquerading of Rachel Dolezal (now Nkechi Amare Diallo) were a little Rachel Dolezal themselves in some way. There are more Dolezal’s than people would like to admit. In her case, Dolezal claims that she identifies as black because that’s how she feels. But that doesn’t make her the same black as an African-American. I personally don’t care either way. She can feel black if she wants to, she can relate to whatever culture she vibes with, and I can feelCanadian too. But it doesn’t mean she deserves the presidency of a chapter of the NAACP because of her self-perceived blackness, and I really don’t deserve this awesome lighter either.

At the heart of the critique of cultural appropriation is the sense of colonialist injustice, where the dominant culture in some way benefits from the use and sometimes theft and exploitation of a resource, practice or other element of a minority culture, while at the same time alienating the culture, and perverting the origins of the appropriated element. The lines drawn between assimilation and appropriation implies a natural cultural separation where certain people have a perceived authority, and can and cannot do things based on race, gender or social identity. Thus, the “As a…” sentence phenomenon, where identifying as a member provides an authentication of voice and legitimacy of an argument, observation, etc. The locution has the ability to cut across communication to delineate cultural perspectives, but it’s also easily complicated when you throw into the mix the idea of intersectionality, media-created stereotypes, and just HOW black, gay, Canadian a person is over another as a representative of that community. As useful as the assertion and sometimes exhibition of identity can be for the individual in a community, there is a strange human desire to speak from a place of sameness (identity = identical) as opposed to speaking from the unique, independently thinking and individual parts of ourselves. And an even stranger trend of people exchanging their identity for their identity politics.

In the end, I still took my friend’s lighter. I didn’t take it because I deserved it, earned it, or bought it. I took it because, speaking as an American fake Canadian dick-sucker with a girlfriend, I just really wanted it.